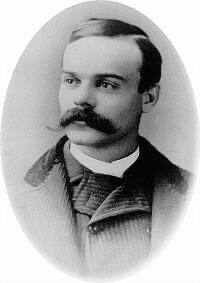 Stuart, Florida on the beautiful St. Lucie River was named in honor of Homer Hine Stuart Jr . The origin of the name is confirmed by correspondence of Homer Hine Stuart Jr. and his brother Inglis Stuart, Florida East Coast Railway material in the archives at Flagler Museum in Palm Beach, land records and newspaper articles published when the Stuart name referred to the settlement on the north side of the St. Lucie River.

Homer Hine Stuart Jr. was born at Willow Tree, New York on January 30, 1855. After attending a private school in New York City, he entered Dartmouth College in Hanover, New Hampshire. Homer left college after his junior year and worked for a company that manufactured cream of tartar in New York City, eventually becoming its manager.

Homer's father was a distinguished New York City lawyer who, in addition to practicing law, wrote scholarly articles for publication. He was counsel for the Continental Bank Note Company and ultimately became its president.

Homer Stuart Jr.'s mother, Margaret Dunbar, and his father were married in New York City, September 4, 1849. His older sister, Katherine Dunbar Stuart, was born November 22, 1852, and married John G. Dunscombe in 1884. Both Katherine and John died in Florida and are buried in All Saints Cemetery in Jensen Beach.

Godfroi, their son, who died in 1916, lies beside them. Another son, Carroll, who spent his adult life in Stuart, married Janet Krueger, and is buried beside her in All Saints Cemetery. Both Carroll and Janet, who were very active in community affairs, died in 1976. Inglis, Homer's younger brother, who was born March 24, 1857, followed in his father's footsteps and became an attorney with a New York City practice.

Homer Hine Stuart Jr.'s motive for coming to Florida in 1883 and settling on the St. Lucie River is not clear. Perhaps it was to purchase land for the family's future. Homer was not the only member of the family to acquire land in Florida. His mother, sister, brother in law, niece and nephew all owned land on the river. Homer built a bungalow on the north side of the St. Lucie River and commenced to grow pineapples as everyone else in the area was doing. Letters he wrote to his future wife, Margaret Kenney, from November 1886 to May 1887, have been preserved and donated to the Historical Society of Martin County.

Homer Sr. died suddenly in 1885, and his widow visited her son on the St. Lucie River the following fall. It was during and immediately following his mother's visit that the surviving letters were written. They reveal a son's love and his admiration for his mother's spunk, and tell of the trials and tribulations of pioneer life, especially in regard to getting mail from the outside world. A great deal is said about the pioneer bill of fare.

When Homer's mother arrived she was greeted with gifts of pineapples, oranges, lemons, limes and a green turtle. Later they dined on such things as dove, sand hill crane, and opossum.

Giving Up on Pioneering

Homer's fiancée declined his invitation to come to Florida and soon Homer gave up pioneering and returned north. Homer and Margaret married in Athens, New York, on October 3, 1888, and moved to Philadelphia, where he managed a division of the Fairbanks Company, scale manufacturers. After retiring in 1910, the Stuarts lived in Beacon, NY, where Homer served as a trustee for a local savings bank and was president of the school board. He and Margaret had only one child, a son, Homer Howland Stuart. Their grandson Homer Howland Stuart Jr., shared his family's Florida letters and memorabilia with the author and local historical groups.

This information is from pages of Sandra Thurlow's Book "Stuart on the St. Lucie, A Pictorial".